If you have listened in to any debate between an atheist with a christian, often times the debates centred around the ‘notia’ aspect (knowledge), while that is not the only way to try to convert others to Christianity, that might be the most publicised way to do so. So what other ways can a faithful christian try to do? Scores of books on apologetics have tried to fill in this gap but too many a times, they too are leaning too much into the ‘notia’ aspect too. 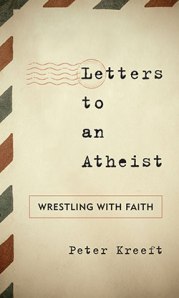 Which is why I think, this book ought to the read by those who wants to do just that. If you have heard about the author (if you don’t, google/wiki it), Peter Kreeft, you would have know that he is a professor of philosophy which might terrify some, and perhaps makes the rest of us wonder whether or not we should even attempt to read this book. But have no fear, it’s not as difficult as you expect.

In a series of letters, Kreeft corresponds with Michael, an atheist, trying to have a ‘debate’ about each others’ faith. Though Michael is a fictional character, it is by no means an ‘artificial’ debate. Within this book, Kreeft approaches the topic with rigour (what I term as hard [or technical]  philosophical approach) but that is not the focus of the book, far more often, Kreeft approaches the topics using what I call the soft (or laymen) philosophical approach, for example, Kreeft uses the beauty and desire as argument/pointers for the existence of God. Sure, some will find this a little difficult to digest, but Kreeft has consciously (and deliberately) left out the most technical and difficult bits so as to make this book more accessible for the masses.

What is more, included in the last section of the book Kreeft answers against some of the questions often raised against christianity such as hell, the problem of evil, the harm religion has done in history and others. I found this section exceptionally helpful and had it not been included it would have made the book a lot less helpful.  Although these questions are not tackled in length by Kreeft, he answers them succinctly and to the point. Some might want to see this portion expanded more, but this was not the purpose of the book and should be sufficient for most.

So if you’re thinking of reaching out to the atheists around you with some meaningful conversations, do give this book a read, it’ll help you to be able to have good time conversing with them, checking each others’ presuppositions and its effect on our day-to-day living.

If you’re interested, you can get it here, and here (free international shipping), Kindle.

Disclaimer: I was given this book free from the publisher in exchange for an honest review.

No. of Visits so far

Beyond the Page Book Reviewer

John Owen, one morsel at a time

learning to number my days